This first card uses the same Caardvarks sketch from THIS post. I used my Curved Rectangles Nestabilities to cut the shapes from the green gingham Christina Re paper and the brown Bazzil cardstock. The green crinkled paper is what I saved from my birthday bunch of flowers.........it was too pretty to throw out, and I'm doing my bit for the environment! I sewed this to the brown Bazzil card.

The greeting stamp is from a Stampin' Up Saleabration set. I added some thin green satin ribbon, paper flower and a Paper String Daisy by Sandie. My friend Sandie makes these so go check them out! Added a button and green embroidery thread to the flower centre. 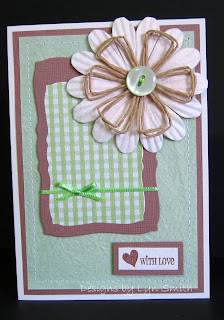 This second card also features one of Sandie's Paper String Daisies . The pink flower underneath it is a foam flower, which I sprayed with Tattered Angels Pink Vintage Glimmer Mist, there's a brown paper flower under it and I added a blue heart brad to the flower centre. The design paper is by Cloud Nine, I used a Cuttlebug border embossing folder with a button design, the greeting is again made with my JustRite stamper. I cut out the circle and scalloped circle with Nestabilities dies, also used Fiskars Water Threading punch along the bottom edge of the design paper. 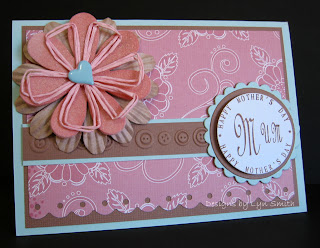 Thanks again for dropping by my blog, have a great day!

It's 'Bring a Friend' month at Inkurable Stampers! If you enter the March challenge, which is to use Alphabet stamps somewhere on your card or ATC, and mention my name as the friend who referred you, then I get to win a great stamp prize! What's in it for you? Well, you can bring another friend and also be eligible, but you can also win one of the other great prizes on offer, which you can see HERE ! Easy huh, but you better hurry as you only have until midnight on Tuesday to enter!

OK, onto my card I have made for the challenge! It's my 35th wedding anniversary next month, (Yes, I was a child bride!) so this is the card I've made for my DH. You will probably think I have a very warped sense of humour, but I think it will make DH chuckle......he is such an unromantic! 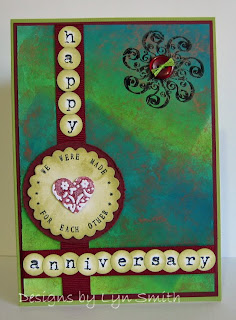 This is the front of the card...........looks pretty innocuous, but take note of the 'We were made for each other' greeting. Before you move on, I'll just tell you what I've used here. The background is a Technique Junkies technique, which I did ages ago and can't remember what it is called, (I know, I should write on the back when I do them!) but it involves glossy cardstock, Kaleidacolour inkpad and a metallic re-inker (I think!). The 'Happy Anniversary' is made with Image Tree Antique Typewriter alphabet stamps - I stamped them on white cardstock, then punched out with a small circle punch and sponged the edges with Tim Holtz Shabby Shutters Distress ink. I mounted them onto burgundy grosgrain ribbon.

The 'We were made for each other' was stamped with the JustRite stampers small letter alphabet set - cut this out with a Nestabilities scalloped circle die and sponged it with the same ink. I've added a punched heart, which I inked with Tim Holtz Aged Mahogany Distress Ink, and embossed with the Textile Cuttlebug folder.....actually I inked up the embossing folder to get that effect!

I used a Stamp-It 'Distressed Swirl' stamp on the top right side of the card and added a button and embroidery thread to it. 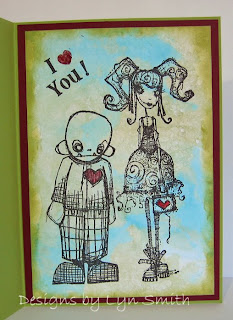 Don't we make a lovely couple? The stamps are by Stampotique,(these are available at The Stamping Queen) the man is called 'Heart Throb' and the female is called 'Moth Fab'. I used another alphabet set to make the 'I {heart} You' - it's a clear set by Card Stamp & Scrap. The background for this is another Technique Junkies technique called Al Float, I sponged the edges with Tim Holtz Shabby Shutters Distress Ink.

I've used sketch #7 from the Card Patterns blog to make this card. 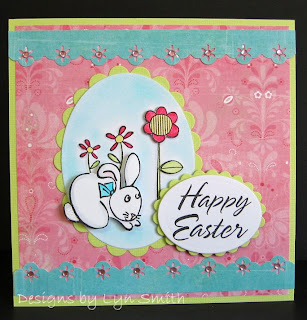 The greeting is from the Stampin Up "All Year Cheer" set, bunny stamp is by Oogaloo and the flower stamps are all from the Heidi Grace "Tags and Words" set. The papers are from the Basic Grey "Urban Prairie" 6 x 6 pad. Cardstock is Bazzil "Limade", also added pink Kaiser rhinestones to the Fiskars lacy border punched paper. 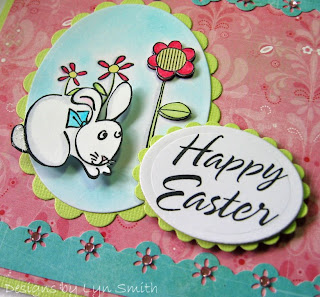 Here's a close-up so you can see the dimension of the bunny and flower that I cut out and popped onto dimensional dots. I coloured the images with markers (assorted Whispers and Tombow), I did the blue background with chalk. Oh, and the bunny tail is covered with Frosted Lace Stickles, and I used oval and scalloped oval Nestabilities dies.

Thanks for looking, and have a great day!

I've been making lots of cards, mostly Mother's Day ones, for my daughter Jo to take to work and sell for me. I'd already made these when I saw this week's Caardvarks Hero Arts Sketch challenge and I think these resemble the sketch enough to qualify...OK, if you turn the 2nd card around it looks something like it anyway! 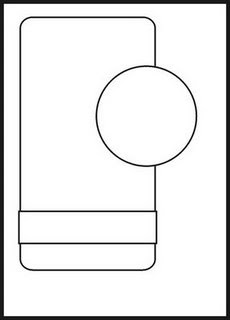 For this card I used my JustRite Stamper to spell out Mum and used the tiny letter set to make the greeting around it, then cut it out using a Nestabilities scallop circle. I used some gorgeous Christina Re flocked paper for my background.........click on the photo for a better view as it really is yummy paper! I used Nestabilities label one die for the black piece and added a large flower, burgundy ribbon and little butterfly embellishment. 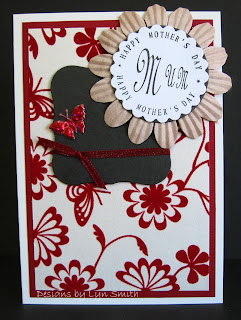 For my second card I used the same JustRite Stamper greeting and a Stampin Up flower and background stamp. Fiskars border punch was used for the side of the black cardstock piece and satin ribbon woven through the slots. Added a few pink Kaiser rhinestones. 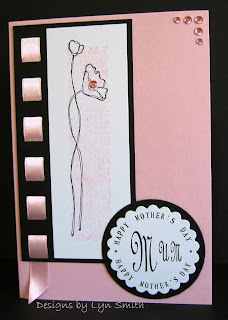 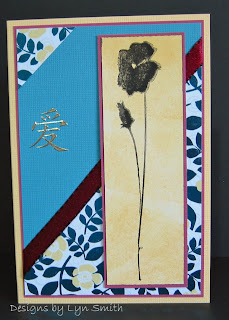 This is my card for this week's OSA Sketch Layout #10. The poppy stamp is by Stampington, the background for the stamp is Adirondack Butterscotch ink brayered onto glossy card - I used Staz-On to stamp the image. All the papers are from the SEI Poppy paper 6 x 6 pad. I added some ribbon and a love kanji peel-off.
Thanks for stopping by today!

My New Zealand blogging friend Sonya (Pickles Patch blog) told me about the Card Patterns blog, they have a new challenge sketch each week - Sonya is on the Design Team there! I had some new toys to play with today, so thought I'd give Sketch #5 a go. 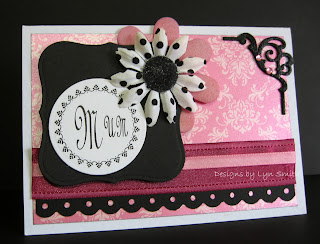 My new toys are some Justrite Stampers - I've been eyeing these off on many of the US blogs and really wanting some, but they were way too expensive to buy from here with our crappy dollar right now.......but, then I found an online store here in Melbourne who would order just what I wanted at a reasonable price, so HAD to buy them!

I used the Justrite Stampers to spell out 'Mum' and used one of the borders from my set. The pretty pink paper is by Christina Re designs. Sadly, I no longer make Mother's Day cards for my own Mum as she died 2 years ago..........she would've loved this card though! 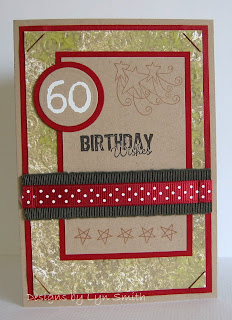 The background for this card was a Technique Junkie tech. that I've forgotten the name of, but it involves Adirondack re-inkers and glossy cardstock! I didn't really like how it turned out so hadn't used it, but after putting it through a Cuttlebug embossing folder it came up allright for a masculine card. 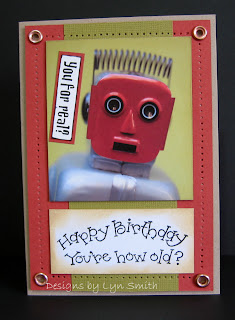 I made this one for my brother's birthday, he's 2 years younger than me and takes delight in giving me funny age related cards, so when I discovered these Darkroom Door Robot Photochips I thought this one with a shocked look on his face was perfect to go with the sentiments!

The 'How old' sentiment is a Penny Black stamp and the other one is from a Darkroom Door Wordstrip (they match the Robot Photochips). I thought the copper coloured eyelets went well with the robot too!

I didn't realise until I uploaded these 2 cards that I'd chosen the same colour scheme for both of them........I actually made them a few days apart and didn't realise I'd done that!

Thanks for dropping by again today! I'm trying to get back into some regular posting, but I don't have as much time these days.....there just aren't enough hours in the day sometimes!

Black plus One Colour Swap card.

This card is for an OSA swap, the theme is Black plus One Colour. I chose Turquoise as my One Colour. You can see the other cards in this swap so far in THIS OSA gallery. 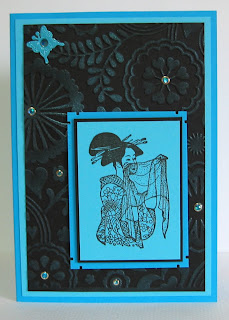 The stamp I've used is by About Art Accents , I used a Cuttlebug embossing folder for my black background and swiped it with Nordic Ice Opalite ink, this is an interference ink that shows up lovely and shimmery on dark coloured cardstock. I used Stampendous turquoise and gold hologram stickers as accents on the background, and added a butterfly eyelet in the top left corner.
Thanks for stopping by my blog today!

I'm sorry I've been MIA here lately and haven't posted any cards, I haven't been feeling too well the last couple of days with a monster migraine, so have been keeping away from the computer. I managed to make a card for the OSA Challenge Layout #9 a few days ago, so here it is! 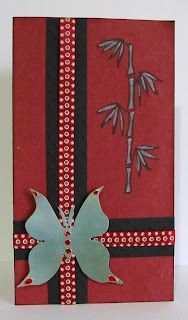 The stamp I used is by See D's, who I think are now Inque Boutique stamps. I've stamped it with Black Versafine ink, coloured it with a white Prismacolor pencil, then coloured over the white with a Peacock Green Prismacolor pencil. Using a white pencil underneath allows the top colour to show through on the dark coloured cardstock.

The black strips of cardstock are embossed with the Cuttlebug Swiss Dots folder and I've layered ribbon over them. I've thought outside the square and used a butterfly instead of the round shape in the sketch. The Far East butterfly diecut has some red/gold holographic stickers added for interest.

The burgundy card is edged with Black ink.........that's it, nice and simple!

As you've all heard, the fires here in Victoria have left many families with virtually nothing but what they were wearing when they fled the fires. I've found out that Mette Thomas is holding an appeal for anyone who has scrapbooking items that they are willing to donate for scrappers living in the bushfire areas. Here is her blog post and you can email her directly if you have something you'd like to send.
This is a good chance to purge those items you've had sitting around unused for ages, if you have an extra paper trimmer, other tools, also scrapping magazines etc.

BTW, I don't know this lady personally, but she was vouched for by the owner of an online store where I have shopped. I'm sending off a box of stuff to her tomorrow, hope you can help too. 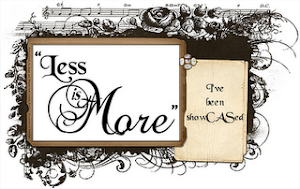 Email me using a link from www. Contactify.com

Lyn S
I'm married with twin daughters, who are grown and flown the nest. We now have a beautiful grand-daughter, Annika and a grandson, Ben! 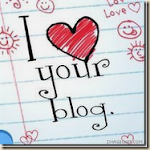 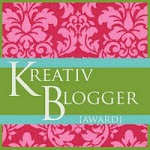